Trending
You are at:Home»News»A new kind of soft battery, inspired by the electric eel 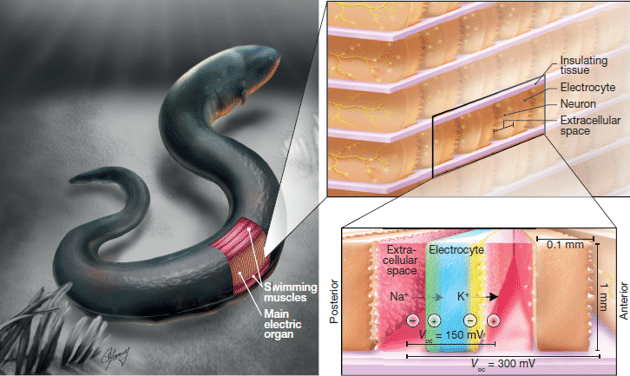 In 1799, the Italian scientist Alessandro Volta fashioned an arm-long stack of zinc and copper discs, separated by salt-soaked cardboard. This “voltaic pile” was the world’s first synthetic battery, but Volta based its design on something far older—the body of the electric eel.

This infamous fish makes its own electricity using an electric organ that makes up 80 percent of its two-meter length. The organ contains thousands of specialized muscle cells called electrocytes. Each only produces a small voltage, but together, they can generate up to 600 volts—enough to stun a human, or even a horse. They also provided Volta with ideas for his battery, turning him into a 19th-century celebrity.

Two centuries on, and batteries are everyday objects. But even now, the electric eel isn’t done inspiring scientists. A team of researchers led by Michael Mayer at the University of Fribourg have now created a new kind of power source that ingeniously mimics the eel’s electric organ.