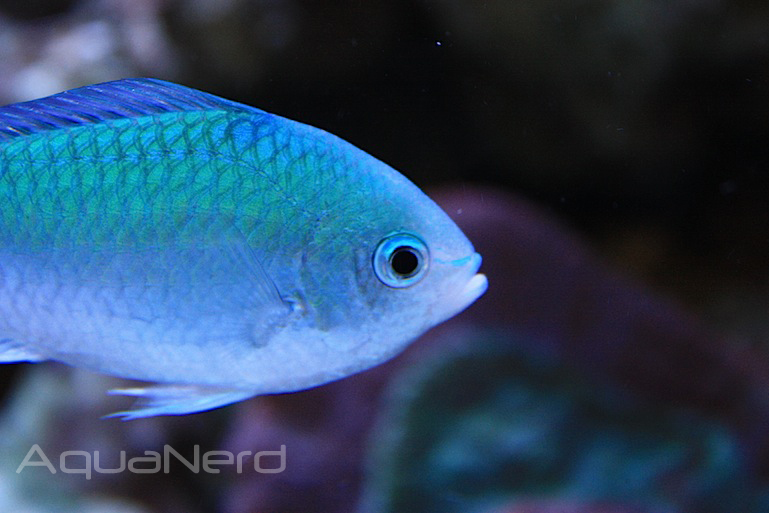 Apparently, it all comes down to luck when keeping Blue-Green Chromis.

First-time saltwater tank owners want an easy-to-care-for fish to start their collection. So, when I asked my local fish store guy which type of fish he would recommend for a beginner with a 90 gallon tank, I was immediately directed to the Blue-Green Chromis (Chromis viridis). These fish are inexpensive (I paid $4.00 each) and have remarkable coloration where the blue blends into the green, creating a shimmer effect. This really stands out, especially when you buy a school of them. They are pretty hardy and can tolerate fluctuations in water quality that commonly occur in beginner tanks. Blue-Green Chromis are listed as peaceful, community fish that will swim openly around the tank. I purchased five.

For the first month, everything was peachy in my tank. The Chromis investigated the entire aquascape as a group. All of them were eating and life was good on the reef. It was a serene and relaxing sight. Well, it was serene until the fateful morning when the lights revealed a shocking, gory scene.

One of the Chromis had huge red sores on its side and it was breathing heavily. I watched in horror as the other four took turns nipping at him, and then ramming him! It was awful. Usually the Chromis are pretty fast, but I was able to net this poor guy right away as he gave no resistance whatsoever. I placed him in my hospital tank, but the next morning he was gone. The same thing occurred the following day, but this time the morning clean-up crew got to the victim before I could.

I rushed to my favorite forums searching for help and advice on how to stop this massacre. My worst fears were confirmed: this was not an uncommon behavior for Blue-Green Chromis. Numerous threads were dedicated to the question of why Chromis suddenly turn on each other. The most frustrating part was that all of the responses were inconsistent. Some posters said that their attempts to host multiple Chromis always ended in a bloodbath. Others insisted that they have always kept multiple Chromis without incident.

The inconsistencies were everywhere. I tried to compare tank sizes, thinking that perhaps it was because the tank was too small. That wasn’t it. Maybe it was due to other threatening tank mates? Strike two. Perhaps all of the Chromis were different sizes and the larger ones beat up the smaller ones? Nope! No matter the situation within the tank, I found stories sharing the wonderful world of schooling Chromis, as well as woeful accounts of Chromis death matches.

WetWebMedia addressed this issue in its forum, noting that Chromis wars are “…an all too common occurrence. Dominance hierarchies often occur, and the subordinate members of the group bear the brunt of the aggression.” Even WWM’s staff writer, Scott F., advised that “…careful selection, quarantine and a healthy dose of luck seem to be the keys to success with these fish.” Apparently, I didn’t have any luck.

My local fish store guy was sympathetic, and said he would be willing to sell me replacements so I could try again. Hmm… let me think…not a chance!

I ended up with one Chromis remaining in my tank. The rest perished within a week. For a while I hated that final Chromis: it made me upset to look at him swimming around so proud to have the entire tank to himself. As I added new fish to my tank, I feared that he would become aggressive again, yet he never attacked any of my other fish and he has been a model citizen ever since. I named him Highlander, since there can be only one.

If you are a new saltwater tank owner looking for your first fish to purchase, take your cue from Dirty Harry. When your local fish store guy suggests the Blue-Green Chromis, ask yourself, “Do you feel lucky?”

Please help us welcome our newest contributor to the AquaNerd Blog, Carrie Shamo. We love the advice she gives and the impact she has had on spreading aquarium news throughout the social media outlets, and we are excited to have her on board.

My saltwater experience began in February 2013. While I am still relatively new to the hobby, I am excited to share my experiences through the eyes of an advanced beginner (I’ve kept freshwater fish for years, so I’m not a total newbie) and hopefully provide some fun and helpful insights and stories during my first journey keeping a saltwater reef tank.