Scientists have recently photographed corals caught in the act of eating live jellyfish. This came as a surprise to many because corals were thought to really only eat microscopic phyto- and zooplankton,  as well as sugars created via photosynthesis,  not jellyfish that are almost as large as the coral itself. The coral caught in the act of eating these jellyfish was the Fungia scruposa, or plate coral. 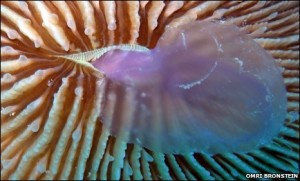 From my years of working in local fish stores and public aquariums, I can honestly say that I wasn’t all that surprised, though the pictures are really cool. I’ve fed Fungia plate corals a wide variety of large foods, including large pieces of krill and small fish. Depending on the health of the specimen, the coral could actually react pretty quickly, consuming a large morsel in a short time. 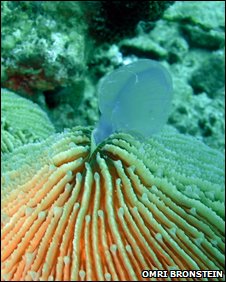