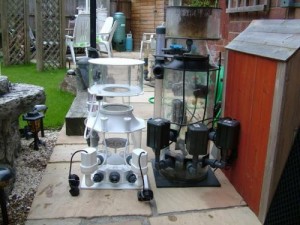 Continuing on with our Deltec protein skimmer updates, I would like to bring you the review of the TC3070 skimmer by Glen Gardiner.

Glen is a UK reef keeper with a 12-foot long reef aquarium, on which he uses two Deltec protein skimmers. Originally, Glen had the Deltec AP1004 and AP703 protein skimmers, which he replaced with a Deltec TC3070 and TC2560.

According to Glen’s Deltec skimmer review on D&D’s website, the new skimmers use fewer pumps, are smaller in both height and footprint, and perform the same if not better than the older style Deltec skimmers. Glen even states how his TC3070 is about about a foot shorter than his AP1004, which is good news for people with limited height within their aquarium stands. The Deltec TC3070 uses only two pumps, and therefore less energy, than the AP1004 which uses three Eheim pumps.

The last thing I wanted to mention was the TC3070’s performance. After installing the new skimmer, Glen let it run for a couple of hours while he was out. Upon his return, the collection cup had already begun to fill with “gunk”, as seen in the following picture. 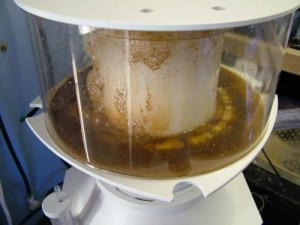