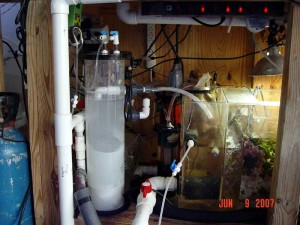 Kalkwasser is a powder calcium hydroxide additive that many reef aquarium keepers use to add both calcium and alkalinity to their tanks. There are many benefits to its use, most notable of which is the fact that it adds calcium to the water without lowering pH, a common problem with calcium reactors. Additionally, Kalkwasser binds phosphate, effectively removing it from the water. Despite its benefits though, Kalk has a potentially terrible flaw. It drastically increases pH and alkalinity in a very short period of time. If you dose Kalk with some form of automatic top off or through some other automated setup, you greatly run the risk of overdosing and wiping out your entire aquarium.

Case in point. A very well known reef aquarist in the Houston area had a big scare yesterday. This individual has a 200+ gallon reef tank that is packed with large Acropora colonies and rare livestock. The aquarium has been even been featured on ReefCentral’s Tank of the Month. The scare occurred yesterday morning. As the aquarium keeper was headed off to work, he noticed his frag tank was cloudy. And since his frag tank and display tank are connected, the problem wasn’t just isolated to the frag tank. Monitoring equipment indicated that the tank’s pH had risen to over 9.3. A reading this high could only mean one thing. The kalkwasser reactor had been dumping water into the tank overnight, causing the pH to rise very sharply. Livestock in the tank was not doing too well. Corals were sliming up and showing signs of stress. The reef keeper, in an attempt to prevent further pH climbing, turned all of lighting equipment off, cleaned his skimmer cup, and unplugged both his calcium and kalkwasser reactors. Despite his tank calamity though, this reefkeeper proceeded on to work, monitoring his tank’s status from his phone. This was accomplished by the Aquacontroller 3 Pro that he had running which can communicate with other devices via the Internet.

The tank’s pH slowly dropped during the day. When the aquarist returned home it had dropped back into the 8.7-8.8 range and things seemed to be fine for the most part. A few frags had RTN’d and a large “Slimer” colony had shown some signs of RTN as well, but overall things seemed to be ok. Despite all this, the aquarium isn’t out of the woods yet. Over the next few days some of the more sensitive corals might not survive the stress of the pH spike.

This event goes to show that not every aquarium keeper, even the most experienced ones, are immune to mistakes and equipment failures. Aquarium automation through various controllers and timers certainly eases the burdens of daily aquarium related chores, but sometimes disaster strikes in the form of equipment failure.