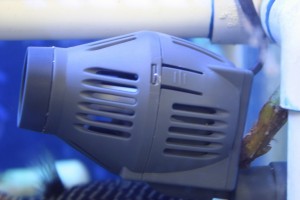 I was recently contacted by a friend of mine who runs the saltwater department at City Pets, a high volume pet store in Houston, and he informed me of a new line of powerheads being released by Coralife. I was invited to come over and take a look at the pumps, get a feel for their quality and performance, and snap off some photos of them. Below is a brief writeup along with some pictures. 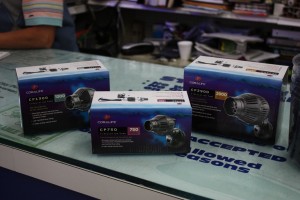 Coralife is releasing three models, the CP750 (750 gph), CP1300 (1300 gph), and the CP2900 (2900 gph), and all of them take hints from competitor’s powerheads already on the market. However, the one thing Coralife is really pushing is their pumps’ ability to prevent backspin of the propeller. On occasion, propeller based water pumps and powerheads have been known to spin the opposite of their intended direction. This is normally only associated with pumps that are being turned off, then on like on “hard-start” wavemakers or when turning off the pumps to feed the aquarium. Whether or not these new Coralife pumps solve that annoying problem is yet to be seen since they haven’t hit the market yet and haven’t quite been pushed to the limits by aquarium hobbyists. But I’m sure these pumps will live up to that promise for the most part. 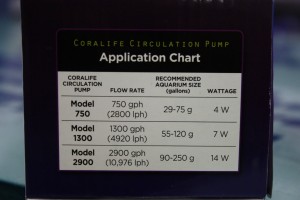 Another thing that sets the Coralife pumps apart from the rest is their massive water flow numbers with a relatively small price tag. I was informed that the prices for these pumps will range from the mid-$40 to the mid-$80, with water flow rates topping out at 2900 gph. This is obviously quite a bit more than comparably priced pumps on the market. And to top that off, these pumps are reported to be extremely energy effective. The Coralife CP2900 (2900 gph) uses a mere 14 watts of juice, another way Coralife is topping the competition. Despite these advantages, these pumps do have one flaw, and that’s their tank mounting hardware. The Coralife circulation pumps don’t have a magnet holder like competing brands. Instead, they have a large suction cup that is controlled by a small lever. To place the pump in the tank, simply pull the lever on the suction cup, put the pump in it’s desired location, and then push the lever down. This causes a good deal of suction force, but it makes repositioning the pump more tedious and suction cups don’t fare well in saltwater. But, hopefully the suction cups stand the test of time and keep the pump secured on the aquarium wall.

All in all, I would say Coralife is certainly moving in the right direction with these pumps. I would definitely love to see magnet mounts instead of suction cups, but that of course would drive up the price some. The water flow from these pumps seems a little more focused than Koralia pumps put out, but the flow is powerful and they definitely move some water. 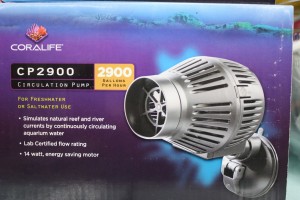