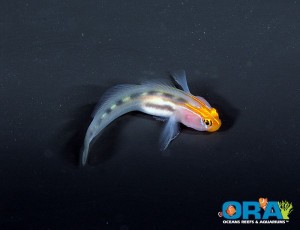 ORA is releasing yet another fish, the red head goby (Elacatinus puncticulatus). Well, this is more of a re-release as ORA had these several years ago, but stopped their “production” due to the difficulties of raising these fish. The red head goby is considered a cleaner goby and makes for a friendly aquarium resident. It can be seen cleaning tank mates on occasion, but I assume they will also take prepared foods.

The Red Head Goby’s natural range is from the Sea of Cortez to Ecuador. This small goby, as the name implies, has a brilliant red head with a translucent body. Within the red coloration there are vivid gold and blue stripes. The Red Head Goby is a known cleaner goby, it is not uncommon to see individuals remove parasites from other fish. Initially they are slightly more cryptic than some of their Caribbean counterparts but once they get comfortable in a tank they tend to stay out in the open where their vibrant head makes them easy to spot. Their small size and peaceful behavior makes them a perfect match for large and tiny tanks alike. This is not a true new species for ORA, we raised the Red Head Goby with some difficulty years ago. Improvements in Broodstock Husbandry and Larval Rearing have greatly improved our success and now we are pleased to bring this striking species to you.