Trending
You are at:Home»News»ReefLife Magazine to Stop Publishing 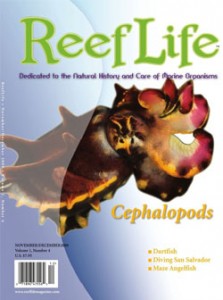 In November of last year I discovered a fairly new saltwater aquarium magazine, called ReefLife Magazine, at my local retail book store. I purchased a copy, browsed it from cover to cover, and wrote up a nice little article about the publication. But apparently the economy has claimed another victim. EcoSystem Publications is pulling the plug on ReefLife Magazine to focus more on its product line.

Jake Adams, a contributor to ReefLife Magazine and Reef Builders, recently broke the news on the Reef Builders website, sharing with us a portion of a letter sent out to subscribers of the magazine.

Due to this difficult economic climate, EcoSystem Publications will no longer be publishing ReefLife magazine. As such, the November/December 2009 issue was the last issue that will be produced. We appreciate your support and are truly sorry we will no longer be producing ReefLife, as we worked very hard to make it one of the best marine and reef magazines available. Instead, Ecosystem Aquarium will be focusing on its vast line of products.

I hate to see this magazine biting the dust. I was amazed at the quality of the writing and the images used in the articles. But the economy will probably continue to claim more victims.