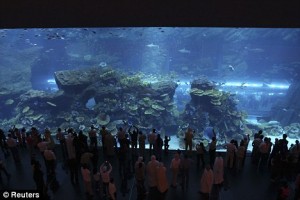 The massive 2.6 million gallon aquarium at the Dubai Mall, which features the world’s largest acrylic window, has sprung a leak. Witnesses reported that a leak developed in a glass panel and that water had begun to puddle. Security quickly evacuated the portion of the mall where the aquarium is located, yet the crack continued to grow. The small puddle eventually led to the floor in the surrounding area to be covered by a shoe-soaking amount of saltwater. Aquarium staff were also seen in the aquarium preparing for a patch. Video of the leak can be seen below.