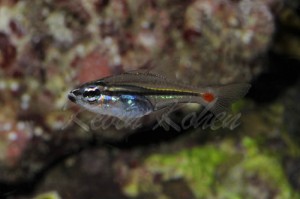 Kevin Kohen, the director of LiveAquaria, recently posted a few interesting comments on ReefCentral regarding the Redspot Cardinalfish and how LiveAquaria is not only having a ton of success keeping them alive and healthy, but also breeding them! We all remember the success the LiveAquaria crew had with breeding and raising McCulloch’s clownfish, which we have discussed quite a bit on here at AquaNerd. With this story in mind, we are very confident the LiveAquaria staff can raise Redspot Cardinals as well.

Cardinalfish, for various reasons, have been a very troublesome fish to keep alive in captivity. They appear to be hardy, they are not aggressive, they do not grow very large, and they form small groups in the wild and in the home aquarium. They seem like the perfect fish. But for some reason many people have trouble with them, with the exception of the Pajama Cardinalfish. The aquarium industry has even caused quite the uproar with it’s insatiable appetite for wild Bangaii cardinals, which almost never survive long term, causing wild populations to dwindle. But the love for cardinalfish continues, and hobbyists are now trying to give nature a little break by breeding and raising these, and other, cardinalfish in captivity. 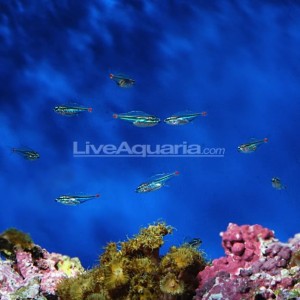 The Red Spot Cardinalfish (Apogon parvulus) usually suffers high mortality rates due to improper handling and not being fed properly. They are very fragile fish that need to be handled with great care. The shipping stress alone claims more fish than anything else. Couple that with a severe lack of proper food and amount of feedings, they stand no real chance.

We have received several great batches of these fish [Red Spot Cardinalfish] in the past month or so, with little to no mortality. This can be directly attributed to proper handling and conditioning. Once they arrive to us, holding them with small, less active and passive fish, and with intensive conditioning for a few weeks, they are rock solid fish. 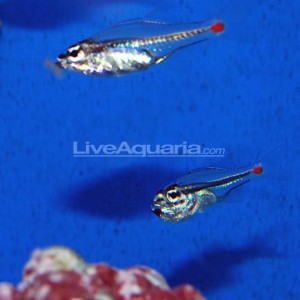 Ten newly imported Red Spot Cardinalfish were added to an establish test aquarium at the LiveAquaria facility on 12/18/09. The 30-gallon breeder test aquarium didn’t have any other fish in it. Instead it housed about 18 lbs of live rock (removed from another system) and a cleanup crew. Lighting was provided by a 4-bulb T5HO light fixture, with water filtration being handled by a protein skimmer, activated carbon, and a simple wet/dry system.

To get the usually finicky Redspot Cardinals to eat, LiveAquaria staffers fed the group a combination of frozen prawn eggs and Cyclopeeze a whopping TEN times per day. After ten days of this conditioning, the group of cardinalfish were switched over to enriched frozen artemia mixed with Cyclopeeze, and the frequency was cut back to 5-6 feedings per day. After a few weeks with consistent feedings of the new food, their diet was once again changed (again, another slow conversion). Their new meals consisted of frozen artemia with small Hikari Mysis shrimp. After a few weeks, the Red Spot Cardinalfish were eating virtually any prepared foods, including the occasional flake foods.

LiveAquaria had continued success with these fish, and as of 1/28/10 (or only a little over a month since arriving) the fish had spawned. It’s amazing enough that all ten survived that long, let alone having them spawn in captivity. This was evident by one of the males carrying a clutch of eggs in his mouth. 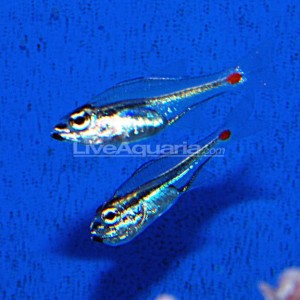 There aren’t anymore updates to the story yet, but as they come out we will surely keep AquaNerd readers informed.

Permissions and Sources:
© 2010 Drs. Foster and Smith, Inc.
Reprinted as a courtesy and with permission from
DrsFosterSmith.com (http://www.DrsFosterSmith.com)
Free pet supply catalog: 1-800-323-4208