Trending
You are at:Home»Aquarium Equipment»Using Protein Skimmers as Problem Indicators 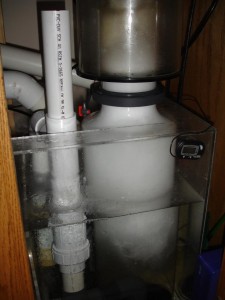 Aquarium keepers can usually spot a problem in their aquarium just by taking a quick look. The tank looks a little cloudy, a particular fish is swimming in an unusual manner, or coral polyps are retracted. But sometimes these things don’t get noticed or they don’t exist. Without typical visual cues, how does one know there is an issue in their aquarium? This is where the protein skimmer comes into play. The protein skimmer, or foam fractionator, operates 24/7 on most aquariums. Once set, it operates at the same water level and will produce fairly consistent bubble action. But when the skimmer starts acting up, the aquarist needs to be on the lookout for what’s causing this.

Most of the time, the protein skimmer begins producing fewer bubbles when something gets caught in the impeller. But occasionally, the skimmer will “go nuts” and produce far more bubbles than usual. The skimmate becomes very wet, and at this point the hobbyist will know there is an issue. When a skimmer reacts like this, it usually means there is a large increase in nutrients in the water. This could be from a chemical or food product being introduced, or a particular fish or invertebrate has died. 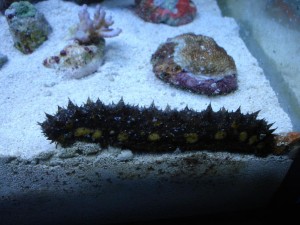 Recently, I was doing routine maintenance on a holding system I currently have set up at my house. The tank is just a Rubbermaid tub with a small amount of live rock and a few invertebrates, including a tiger tail sea cucumber. The cucumber likes to hang out on a Tunze powerhead and has never been an issue. But on this day, I noticed the skimmer going crazy. The bubble production was way up and the collection cup was quickly filling. I knew there was something wrong, so I began looking. I turned over a few rocks before noticing something stringy coming from my Tunze. Right then I knew it was the cucumber. I turned everything off, removed the cucumber from the outside of the pump housing, removed the stringy intestines and pieces of cucumber from the pump, and turned everything back on. The skimmer went right back to overskimming, for lack of a better term, and lasted this way for several hours. Because the skimmer was going crazy, I could realize there was an issue that I may not have noticed, until it was too late and the dead cucumber “nuked” the remaining livestock in the tub.