Trending
You are at:Home»Aquarium Livestock»ORA Releases All Black Ocellaris Clownfish

Oceans Reefs and Aquariums (ORA) has released another clownfish…this time an all black one. For years an all orange “naked clownfish” has been available on the market. Then an all white clownfish started showing up (the Platinum Picasso). After these came out, speculation and rumors were running rampant that ORA was designing an all black clownfish, and that speculation has finally turned true. The ORA Midnight clownfish is black from head to tail. It is completely lacking stripes and has a slight bit of orange on its face, which goes away with age. ORA is also releasing the Domino clownfish, which is a variant of the all black form. The Domino can have a single white dot or multiple dots on its body, hence the name.

Personally, the all black clownfish isn’t all that attractive. It’s certainly unique, which I can appreciate, but I like the Domino clownfish since it is a little less boring. So now that we have an all white and an all black clownfish from ORA, I wonder what’s next…at least in the clownfish world. 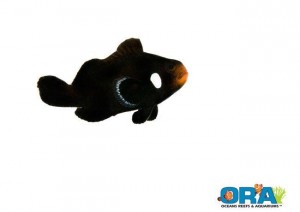 Here’s a press release from ORA:

Last month at Global Pet Expo 2010 we unveiled our newest designer clownfish. The ORA Midnight Clown is an all black clown with no stripes. It is the result of a natural mutation found in ORA’s grow-out systems and was selectively bred over the past year.

While maybe not for purists, we are sure that clownfish aficionados will be thrilled with this newest entry, and a devoted collector could now have an all-orange, a near all-white and an all-black ocellaris clownfish.

Just as with the natural Black Ocellaris variation, the Midnight Clown starts out life with an orange color that turns black as it ages. The new Midnights available from ORA have almost completely transformed to black, but may have a touch of their juvenile orange left. They will finish becoming all black as they reach maturity. The offspring run the gamut from being completely naked to uniquely patterned extreme misbars.

Occasionally we find Midnight Clowns with cheek dots and taking Julian Sprung’s advice, we’re nicknaming those “Dominos.” This exceptional color morph is yet another example of the power of selective breeding in aquaculture.