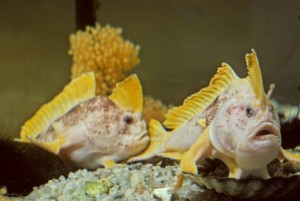 Here’s an interesting story from Treehugger.com about “Handfish”. Apparently, the Commonwealth Scientific and Industrial Research Organization in Australia (CSIRO) recently discovered 9 new species of “handfish”. This new discovery brings the total count of “handfish” to 14 known species. But this may very quickly change, as all 9 of the newly discovered species are also on the verge of extinction. These extremely unique and entertaining fish do not adapt well to changes in the environment, and with the oceans changing dramatically over a relatively short time, their numbers are dwindling. Some species of “handfish” used to be fairly widespread, especially in shallow waters. However, pollution, siltation, non-native animals, rising ocean temperatures, and several other factors play heavily on the distribution and survival of the abnormal “handfish”, causing many populations to dwindle to the point that encounters with these fish are becoming quite rare.