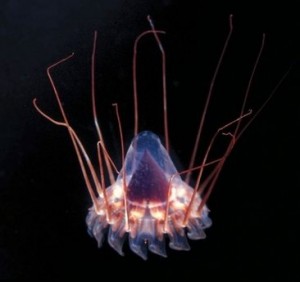 In a recent AFP story on Yahoo!, scientists have discovered “prehistoric” marine life living 4500ft below the Great Barrier Reef. Along with several species of fish, including six-gilled sharks, many different crustaceans and other invertebrates have been discovered. The scientists even found a “giant oil fish”. There wasn’t a picture of this oddly named creature, but I doubt it’s the result of BP.

To attract the deep sea fish to their remotely operated vehicles, the scientists used a tuna head on a stick. They then captured footage of the different ancient ocean dwellers by using special lowlight sensitive cameras. Interestingly, these same cameras will be employed in the very near future to take a look at deep sea life affected by the BP oil spill in the Gulf of Mexico.