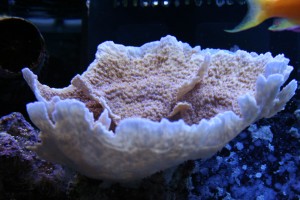 Have you ever noticed that some corals grow upwards instead of outwards? A deepwater Acropora grows in a plating structure in your friend’s tank, but the branches begin to curl up in yours. The reason you’re experiencing this is probably due to your lighting. No, your lighting probably isn’t too weak. Instead, the change in growth comes from just the opposite. Your friend’s reef might have more subdued lighting, perhaps T5HO or a lower wattage of metal halide lighting. If you have metal halides, or anything significantly more intense than the lighting from which the coral came from, the coral will begin to grow upward. Believe it or not, corals can be exposed to too much light. When they do encounter more intense lighting, they adapt by growing straight up. It may seem counter-intuitive, but the coral does this so as to decrease the surface area and the amount of tissue exposed. Corals found in lower light levels grow outward, maximizing the usable surface area.

Continue reading below for before and after pictures, as well as some comparisons between growth forms and depth at which corals are naturally found. 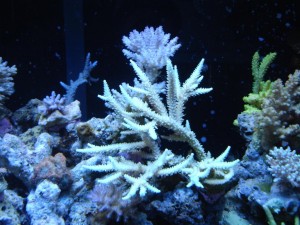 If you think about the depths at which certain corals are found, it will make more sense. Plating Montipora corals are typically found in deeper water, or at least in areas where the waters are more turbid and allow less light in. Acropora corals, on the other hand, can be found in very shallow waters. Acros are typically exposed to more light and will therefore exhibit a branching growth patter. Some of the branches can be quite thin and elongate, while others are shorter and thicker. More factors, such as water flow and available nutrients, certainly come into play, but light intensity can greatly influence coral growth in terms of shape.

Before and After Shots 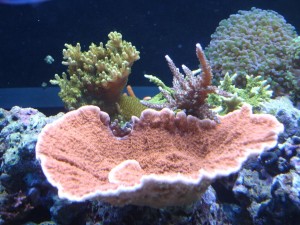 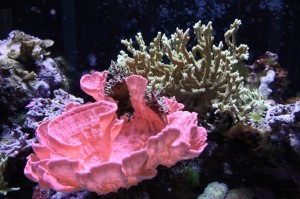 Same Monti as above, but growing under metal halides

Please keep in mind that several generalizations were made in this article. Not all corals follow these patterns, though many deepwater corals that get exposed to intense lighting do grow in a more vertical, branching fashion. Additionally, corals can become acclimated to the more intense light and resume growth in a more normal manner. This especially holds true for aquacultured corals. Also keep in mind that soft corals will behave differently. When exposed to lower light levels, the soft corals might “reach” for the light in an attempt to increase their exposure.