Bleached Corals in the Philippines

Some sad news from the Indo-Pacific region. According to Philippine Daily Inquirer, scientists have been following a massive bleaching event taking place all over the reefs surrounding the Philippines. The reason for the bleaching has been blamed on elevated water temperatures, a very common reef killer. Once pristine areas are turning into white reefs, completely devoid of life. Some areas have even experienced bleaching on the scale of “50-75 percent” of the corals.

Scientists in the Philippines are estimating that this bleaching event could exceed the damage done by a similar event in 1998. Both this event and the one that occurred in ’98 happened during the El Nino cycles and have caused millions of dollars in damages to the tourism and fishery industries. And although the most recent El Nino event has already come and gone, the waters surrounding the Philippines is still warm. Many speculate that this is due to a lack of typhoons in the area.

See below for information on why bleaching occurs, as well as how Philippine researchers are trying to raise awareness. 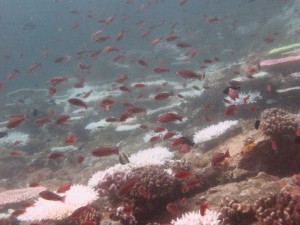 Bleached Reef in the Philippines

Elevated water temperatures, the proposed cause of this particular bleaching event, forces zooxanthella (simple algae living in coral tissues) to either die or leave the coral. This algae, which gives the coral its color, is responsible for a huge percentage of a coral’s daily nutritional intake. Up to 95% of a coral’s food is derived from this photosynthetic algae. If the warming event is short lived, the zooxanthellae could return and the coral could survive. However, if the event is too long, like what is currently going on in the Philippines, the coral will eventually starve.

To help raise awareness for the bleaching events in the Philippines, a Facebook group called Philippine Coral Bleaching Watch has been established. I encourage you to at least visit this page and scroll through some of the photos. They are very chilling to say the least.