Trending
You are at:Home»Aquarium Equipment»The Slightly Annoying Things About Wavemakers

Don’t get me wrong, I love anything that mimics nature and creates random, turbulent water flow. Wavemakers are spectacular pieces of equipment that have come so far in the last several years. They make some serious water flow and keep sediment suspended in the water column so that it can be properly and more effectively removed. However, there are a couple of things about wavemakers that sort of annoy me. 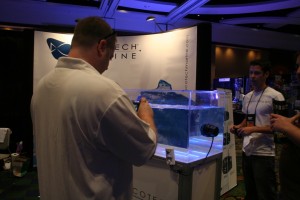 In the wild, the frequency of the ocean waves (not actually waves, but current) is fairly low and corals gently flow back and forth over the reef. The pulsing action in aquariums is drastically different. Most aquarists use wavemakers to create a very quickly moving series of waves to better remove excess detritus. Because fish and parts of corals are also suspended in the water, they also move back and forth at a rapid pace, which is obviously not natural. Aquarium livestock don’t seem to mind this movement, but it can be quite irritating to view to some people.

Continue reading below for another annoyance with wavemakers.

Another slight annoyance to wavemakers is the rapid up and down movement of the water level. This effect can be dizzying and can even weaken the seams of your aquarium. The waves being created cause displacement as they push water back and forth. This type of drastic water movement is great for moving large volumes of water, but it can also move rocks and sand. If you aren’t careful with this technique, you could also shoot a wave right out of your aquarium and onto the floor or electrical equipment. Another issue might be increased evaporation and salt creep accumulation due to the large amount of surface agitation. The last point is purely speculative on my part, but it makes sense to me.

I want to reiterate that I’m not trying to tell you not to use wavemakers or that I dislike them. In fact, I feel the opposite. I want to see improved water movement in the typical home reef aquarium as water flow is very important to coral health and nutrient removal. I just thought it would be interesting to explain some of the unnatural things that come about from trying to mimic nature. Products like the EcoTech Marine VorTech pumps and Tunze pumps on wavemakers can create massive sine waves or just all out turbulence. The type of wave you choose is obviously a personal preference.