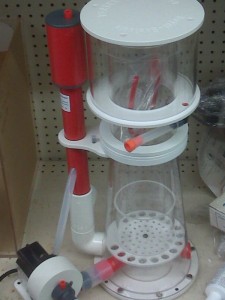 There’s a never ending debate about protein skimmers raging on in aquarium-related forums across the globe, none of which are backed by anything other than personal experience and faulty logic. Many people claim that inexpensive protein skimmers work just as well, if not better than, the higher end models. On the other end of the spectrum, fanboys of the high end gadgetry say their expensive pumps, bubble plates, and cone shapes fare better at removing dissolved organics from aquarium water. Most people base their opinions on their own experiences, or the experiences of fellow aquarists. Some even base their opinions on theory, claiming that because the skimmers are more expensive, they are intrinsically better.

To help clear the mud, Advanced Aquarist released an article answering this question scientifically. After sorting through all the mind numbing math, their overall conclusion was that, while the more expensive protein skimmers do remove slightly more total organic carbon, the differences between the skimmers weren’t significant. If you factor in the cost of the skimmer, then the less expensive protein skimmers significantly outperform their higher end rivals. Look at it this way. The most expensive protein skimmer tested was a Bubble King Mini 160, which cost approximately $775. The cheapest skimmer used for the study was a Precision Marine ES100 that costs a mere $160. The difference in total organic carbon (TOC) removal was only 13%, in favor of the Bubble King. Does an extra $600 really justify a 13% increase in performance? Keep in mind too that the ES100 also had the greatest rate of TOC removal, meaning it removed the organic carbon faster than any other skimmer in the test.

For some, it boils down to more than just the TOC removed. Many aquarists take energy efficiency, tank capacity, footprint, and quality of the construction into account, and these can all push someone to a much more expensive protein skimmer.