Trending
You are at:Home»Aquarium Equipment»Follow Up to “New Skimmers From Precision Marine” 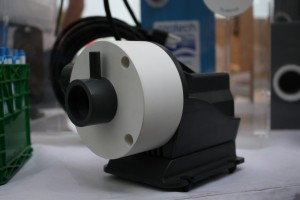 I was rummaging through several old photos the other day when I came across an image of a unique looking skimmer pump that Precision Marine was toying around with using on potential future protein skimmers. We initially wrote about this pump almost a year ago, but since no new products featuring this pump had been released from PM, I decided to shoot them an email and ask what was up. Mike quickly responded, indicating to me that Precision Marine was still in the decision making process. He further commented that their customers were very happy with the inexpensive, yet effective protein skimmer offered by the company. Taking it a step farther, Mike mentioned that most hobbyists would rather spend less money on their protein skimmer so they could also incorporate an ozonizer, aquarium controller, or some other filtration device into their setup. A reasonable idea no doubt, since a majority of aquarium owners have other obligations that prevent them from sinking a small fortune into their setups.

Admittedly, I’m a little disappointed that we won’t be seeing a new skimmer line in the near future (I am a gadget junky, what can I say), but I do like the approach taken by PM. I commended Mike for standing by his products and not jumping on every bandwagon in order to try to grab every gadget-hungry marine aquarists out there (see Precision Marine’s take on cone-shaped skimmers). And you know a company is proud of what they offer when you see relatively little change in their products over a several year period. I admit that I have never owned a Precision Marine protein skimmer, though I’m hoping to get my hands on one to review. However, I have owned a few of their other products and I was absolutely impressed with both their craftsmanship and functionality.