Trending
You are at:Home»Aquarium Equipment»CoralVue Lumen Bright Fixture with LEDs and T5HO 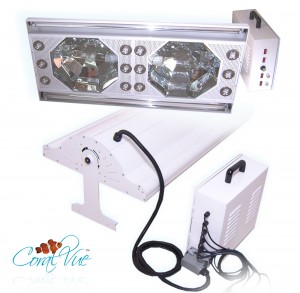 The Lumen Bright reflectors and pendants from CoralVue are arguably some of the best metal halide lights available on the market. But this doesn’t seem good enough for CoralVue, as they are cramming these amazing reflectors into a fixture that will also contain LEDs and T5HO. The Lumen Bright fixture, which will officially be available January 2011, sports twelve 1-watt LEDs. Two T5HO bulbs and reflectors are also built into the fixture, but angled inward toward the aquarium.

All of the electronic components of the Lumen Bright combo fixture are located externally. The ballasts, dimmers, power switches and cords will all be located in a separate metal housing. Only a single cord runs from the fixture to the external ballast box, making the install as clean as possible. All of the components will have separate power cords, allowing each to be plugged into a timer. Additionally, the metal halides and all of the LEDs are dimmable. The fixtures will be available in a black or white finish.

Continue reading below for the official product information release from CoralVue, as well as several more images and prices. 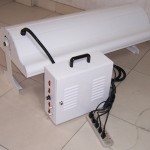 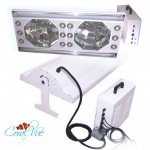 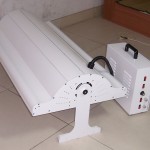 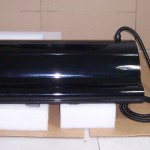 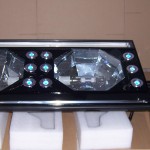 As seen at Macna 2010, this long overdue lighting fixture containing our Lumen Bright mini reflectors, High output T5s and positionable LED moonlights will be available January 2011. All electronics are external to the fixture and contained within a simple component box. All ballast have separate power plugs so timers can be used on each light. All metal halide ballast are dimmable as well as the LED’s. Note the T5s are mounted at angles to direct the light within the aquarium due to the suggest hanging heights of Lumen Bright reflectors. The fixture body itself is extruded to give it a much more professional look and available in a white or black finish.
36″ One halide 2 T5 9 LED’s $950.00
48″ Two halides 2 T5 12 LED’s $1199.00
60″ Two halides 2 T5 12 LED’s $1499.00
72″ Three halide 2 T5 12 LED’s $1699.00

All LED’s are 1 watt high powered with optics for a wide spread of light.