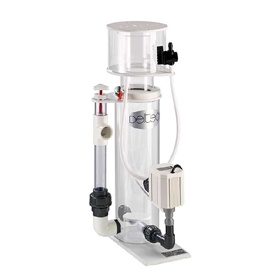 A little over a year ago, Deltec released a whole new lineup of protein skimmers. The TC and SC skimmers, as they were labeled, featured bubble diffusing chambers (single and dual layer depending on the skimmer), air silencers, micro adjustable settings, high water flow through, an optional self cleaning system, drains to remote collectors, and a new color scheme. Originally, only three models were released. Each model came in two versions, external and internal, and the smallest of the bunch was rated for aquariums over 400-gallons. Since the release of the original three models, Deltec has recently released a little brother to the group, called the APF800. As the name suggest, this model will be the predecessor of the Deltec APF600. However, this skimmer will receive all of the new features currently being used on the TC and SC skimmers. The APF800 is suitable for aquariums at or below 250-gallons, drawing in 600 liters per hour of air while only consuming 12 watts. Pricing for this skimmer is set at £474.95, or approximately $675. Interestingly, this is about $100 shy of the sticker price on the APF600. A manual self-cleaning head for the skimmer is also available for an additional $60.

Continue reading below for the product specifications from D-D The Aquarium Solution.

The new APF 800 combines the high skimming performance of the patented TC series with the compact dimensions of its predecessor, the APF 600.