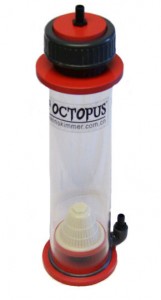 Octopus has released two fairly new media filters, called the MF100 and MF200. Each reactor stands 20″ tall, varying in only their diameter. The MF100 measures 2.5″, with the MF200 at 3.5″. Each reactor will include two media strainers, which will prevent your media from getting sucked into your aquarium or clogging up the feed pump. Both filters will also include barbed fittings and a screw-on lid. The MF100 will start at $100, and the MF200 comes in at just $1o more.

The price sort of surprises me, given the fact that competing reactors top out around $85. I’m not saying the Octopus MF media filters aren’t worth the price difference, but in such a competitive industry, you would assume that the pricing wouldn’t be so far apart. Most aquarium hobbyists shop on a budget, and if your product is on the higher end of the price scale, it probably won’t be wildly popular.