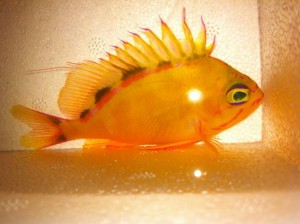 At the end of November, we began discussing a piece of legislation targeting the aquarium industry. This bill, called “A Bill for an Act Relating to Aquarium Aquatic Life”, was introduced by the Maui County officials and was created to increase the regulations on aquatic life collecting. We started reading the bill immediately, but it took us a few days to digest its content. But we finally have some details as to what the bill is designed to accomplish.

If someone is caught violating these rules, they will face stiff penalties, which are outlined below.

I hardly know where to start my criticisms of the bill, but I guess I’ll pick the one that is the most glaring to me. If the creators of this bill had their way, fish and invertebrates endemic to Hawaii would no longer be available to the aquarium industry. These would include the bandit angelfish (Apolemichthys arcuatus), Potter’s angelfish (Centropyge potteri), masked angelfish (Genicanthus personatus), orange margin butterflyfish (Prognathodes basabei), orange anthias (Holanthias fuscipinnis), sunrise wrasse (Bodianus sanguineus), and many other fish. Fortunately, yellow tangs are not endemic to Hawaii, as they can be found in other parts of the world as well.

As for the other requirements to be white listed, they are fairly arbitrary, very broad, and most have little to no way of being regulated in my opinion. They will probably just lead to many fish being black listed when they really shouldn’t be. The confusion created by the bill will probably be one of the major limiting factors contributing to fish collecting.