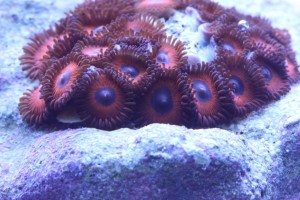 Well over two months ago, we started a fabled ZoaPox treatment that I found on CoralPedia. The treatment called for the use of Furan-2, which is commonly used as an anti-bacterial treatment in freshwater systems. I read testimonials and decided to pursue an identical plan of action that was posted on the site. I set up a 20-gallon long aquarium, filling it halfway with new saltwater. I placed the Zoas in the tank, added a powerhead and a packet of Furan-2 per the instructions. I continued with the treatment, stopping after several days due to not seeing any positive results. The infected Zoanthid colony was then placed back in the frag tank from which it came, still containing the ZoaPox of course, with me hoping the pox would gradually fade away. The coral at this point looked pretty bad. It refused to open up and even lost a lot of its color. The coral sat for over a month in the frag tank showing zero signs of progress, until just recently. I noticed a few of the polyps began opening back up a few days ago, with more opening daily. The color is also coming back, but the ZoaPox remain.

After the initial treatment failed, I found a more concentrated dipping method that was also rumored to work. I planned on pursuing this dip treatment, but ditched that idea when the Zoa frag failed to open after such a long period of time. The coral is bouncing back, slowly, but once it regains its coloration, I’ll be back at it with a different tactic (yet to be determined at this point).

Our Verdict: the week-long Furan-2 treatment failed miserably in our case, nearly costing me the entire frag. Attempt this treatment at your own risk, and only in desperation. We will attempt to cure the ZoaPox using other methods and do a follow-up article on the frag’s condition.