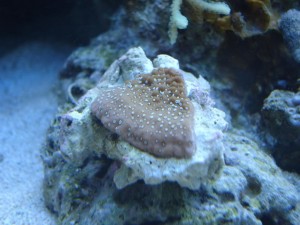 Pictured in this week’s AquaNerd POTW installment is a Steve Tyree true Montipora undata. These Montis are prized among many hard coral keepers, as they are strikingly different than the typical plating M. capricornis that most people have. This species encrusts, but will plate out as the colony gets larger and will also form some upwardly projecting bumps in some individuals. As can be seen in the above image, the white polyps of this Monti stand out significantly against the color of the coral’s base. The specimen above isn’t the most colorful M. undata, mostly because it was a new addition to the aquarium at the time the picture was taken. Despite this, under optimum conditions and some actinic lighting, this coral will develop a purple rim and possible a green tint to the base.