Trending
You are at:Home»News»Senate Passes Bill to Ban Shark Finning 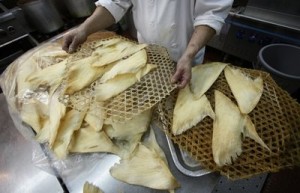 I normally try to avoid posting articles this late in the evening, but this one was too crucial to pass up. According to TheHill.com, the US Senate has passed legislation earlier today that would put more restrictions on shark fin trading in the United States. The bill, which was sponsored by Sen. John Kerry, apparently closes several loopholes present in the original ban on shark finning that was created by former president Bill Clinton.

According to summaries, the bill prohibits any vessel from having custody, control, or possession of shark fins without the body of the shark they came from. It also specifies that all sharks caught must be landed with all of their fins naturally attached. Additionally, the Senate bill serves to promote shark conservation internationally, as well as allow the secretary of Commerce to point out nations that have not adopted shark conservation programs similar to those of the US.

Even though this bill has passed the Senate and the White House has passed a version of their own, the Senate bill has not yet received approval from the President. Regardless, it’s nice to see sharks as the priority for at least some politicians.