Trending
You are at:Home»Aquarium Livestock»Green Fluorescent Protein Infection on the ORA Blog 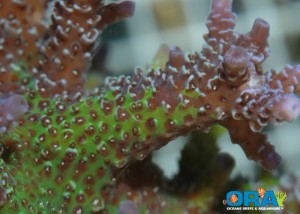 When ORA first announced their newly redesigned website, we were stoked they would have a blog. It would be a way for them to finally communicate with a public audience. Well, right out of the gate, ORA has a great article on Green Fluorescent Protein (GFP) infection in various corals they have aquacultured. The infection was discovered in the coral greenhouse and has been seen in corals such as the ORA Blue Millepora, ORA Plum Crazy, and even their Acropora efflorescens. ORA states that the polyps of these corals are unaffected, with only the base showing any signs of green. Another coral anomaly that ORA wanted to highlight is the mixing of Nuclear Green and Purple Death Palythoa. When these two polyps grow close to each other, the colonies occasionally form what appears to be a mixed polyp. The polyps in between the two colonies express both purple and green coloration.

Unfortunately, the colors in both the mixed Palys and the GFP infected Acros eventually revert back to normal. Because of this, ORA has stated that they will probably never sell corals exhibiting these two color aberrations. The good news though is that ORA has hinted at offereing Purple Death Palys and Nuclear Green Palys sometime in the future. 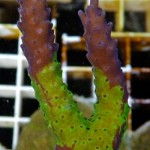 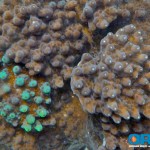 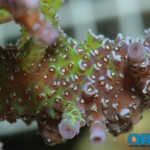 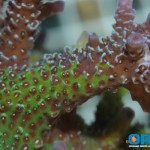 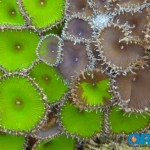