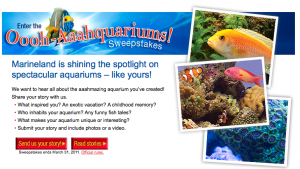 Marineland, a popular aquarium equipment producer, has recently announced they are hosting a giveaway. The contest, called the Oooh-Aaahquariums! Sweepstakes, is not only a way for Marinland to give away free stuff, but it’s also a way for you to share the story of your aquarium. All you have to do to enter the contest is to share a few details about your aquarium, such as what inspired you to start the tank, what you keep in the aquarium, and what makes your setup interesting. Seeing as how they are wanting to hear about your tank’s back story, they also want to see a photo or a video of the reef, fish only, or freshwater system in action. The contest announcement doesn’t indicate how the winners will be picked, I’m currently assuming they will be drawn at random, but the winners will receive their pick of aquarium lighting from Marineland’s new LED lighting systems. The contest ends March 31st of this year, so be sure to get those entries in soon.