Trending
You are at:Home»News»Massive Fish Kill Found Near Dead Birds 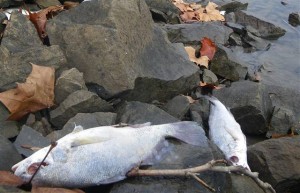 By now we’ve all heard about the mysterious deaths of several thousands of black birds in the state of Arkansas. A related story has surfaced, this time involving fish. An estimated 100,000 drum were discovered last Thursday along the Arkansas River, only a day before the birds started dropping out of the sky and a mere 125 miles away. According to local officials, 95% of the fish were of the same species, with that being some type of freshwater drum. This means the cause of the die-off is not likely due to pollution, but more likely a disease. Up to this point, no other fish have been affected in a major way. The river is still open to fisherman, and it is noted that the affected drum species isn’t one typically consumed by fisherman.

Due to their close proximity, many would assume the fish kill and dead bird incidents were related, but so far nothing has pointed to that. It has been rumored that the birds died because of fireworks, blunt trauma, and/or stress, while the fish are though to die from disease. Either way, there’s a lot of stuff dying in Arkansas and we’re hoping this is the last of it.

Image above from the Arkansas Game and Fish Commission