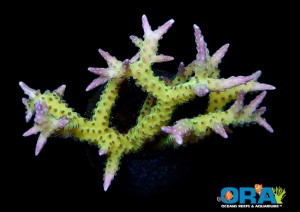 ORA recently announced on their blog that they will be offering the Ponape Birdsnest. This beautiful green Seriatopora has short, thin branches that are tipped with pink. The polyps are very tiny, forming a bumpy appearance on the branches. For those of you who can remember, the Ponape Birdsnest isn’t a newcomer to the game. In fact, it has been around for several years, first surfacing under the “LE” moniker from the famous Steve Tyree. Hobbyists have quickly spread the Ponape Birdsnest, as it is a quick grower, but I’ve honestly never seen one with such a green base as the one ORA is offering. Most of these corals that are offered for sale by hobbyists have nearly white branches, with only a hint of green.

ORA hasn’t released a price tag for this beautiful birdsnest (we’re assuming around $50 per 1″ frag), but they have given us information no how to make this coral really color up in your aquarium. Even though the Ponape does well under just about any lighting, it is best colored under more subdued light systems, or perhaps down low in the aquarium.