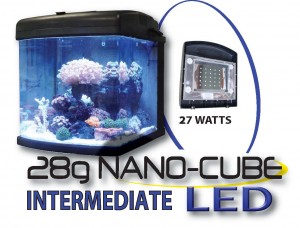 A couple of years ago, JBJ USA released their 28-gallon LED Nano Cube. This popular aquarium featured 25 x 3watt LEDs, a pair of 1 watt LED moonlights, and the typical built-in filtration you might find on most all-in-one nano aquariums. The entire aquarium and equipment consumed a measly 89watts total, but JBJ still feels this is too much.

In order to offer a more eco-friendly product, as well as target the crowd that doesn’t have such high light demands, JBJ is releasing a new LED nano that uses only 27watts! This new cube, dubbed the “Intermediate Series”, is the exact same as the original LED cube, which is now called the “Professional Series”, but differs in only the light. The hood on the Intermediate LED nano will have 25 x 1watt LEDs, along with four 0.5watt moonlights.

There’s no word on pricing yet, but it will probably be somewhere north of $600. This tank is currently available for purchase.

See below for a couple of more pictures, including PAR numbers from JBJ USA. 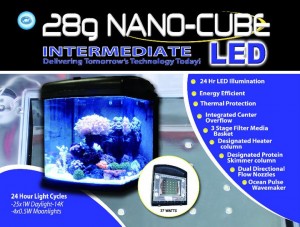