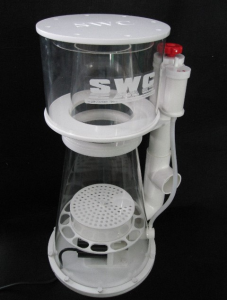 Saltwater Connection, or SWC, has released a new space saving cone skimmer to round out their already large skimmer selection. The new SWC Extreme 300 SS Cone Protein Skimmer, like its bulkier brother the original SWC300, comes with an Askoll 1500 pump and a custom SWC volute and pinwheel impeller. This pump will be mounted inside the body of the skimmer, hence the space saving monikers, and will be sitting directly underneath the bubble plate. The Askoll pump draws up to 90scfh of air while only drawing around 80 total watts of electricity, and the rather large bubble plate is completely removable for easy maintenance.

Even though actual tank ratings for the space saving SWC300 haven’t been released, the original SWC300 with the external pump was rated for aquariums up to 550-gallons with a light bioload. We, of course, expect the numbers between these skimmer to be very similar. Pricing is set at $675 and this new product is currently available to order through SWC or one of its distributors.