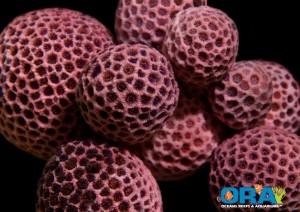 ORA has been growing Goniopora for almost ten years now, but only in the last 3 years have they been making frags from this broodstock. The frags grew very quickly, eventually reaching grapefruit size. Eventually, small buddings would pop off the corals as a form of asexual reproduction, but these grew into something different. Instead of the typical growth form, that is just spreading outward and encrusting over basically whatever it touched, these corals grew in an almost perfect spherical shape. ORA even states that these Goniopora had no bare base or underlying dead spots. From the tiny bud, the frags have grown into golf ball sized mini colonies. 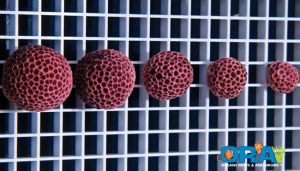 Despite the unique shape, ORA has no intentions of selling these corals. This particular growth form is quite rare, and the aquaculturers don’t have any control of the the abundance of these individuals. But it’s a pretty neat story nonetheless.