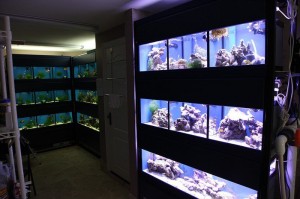 A picture is worth a thousand words. And this photo recently released by “nineball” is doing a lot of talking. Nineball, an extreme aquarium hobbyist from our northern neighbor Canada, chose to ditch the lights he was originally using over his holding tanks in his massive fish room and upgraded to LED light fixtures. The light of choice is provided by Orphek, and the image above shows how drastically brighter their light fixtures are over the lights previously used over the same tanks. The aquariums in the background are illuminated by some type of fluorescents, and the LEDs blow those out of the water. The difference really is amazing, and this scenario goes to show just what sort of foothold LEDs have been able to get in the competitive market of aquarium lighting.

For more information on this stunning and massive aquarium setup, make sure to visit nineball’s build thread over on ReefCentral.

Update: There was some initial confusion as to who the fish tanks and LED light fixtures belonged to. There was a mix up in some of the information we received, but the article has been edited to include that information.