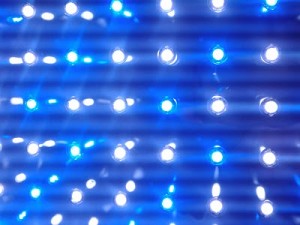 I recently came across an article on the Environmental News Network claiming that LED lights contained various levels of toxic metals. The article was based on research by the University of California Irvine and indicated that the diodes contain toxins such as lead, copper, nickel, arsenic, and more. Of course, the findings of this study have found their way onto aquarium forums around the world, and many people are now questioning whether or not to use LED lighting over their aquariums.

Despite what the study found, which I am in no way doubting, LEDs are not at all dangerous to own or use. They will not sporadically release lead or copper into your reef tank and you will not get cancer using them. These statements are assuming that you aren’t eating the diodes or crunching them up and sprinkling them into you aquarium. As long as the LEDs aren’t broken, the harmful toxins are kept within the bulb and away from your tank. However, if the lights break or the fixture fries due to faulty wiring, salt spray, or improper use, the toxins can enter the aquarium.

To further quell any concerns, metal halides and every type of fluorescent bulb have toxins as well. Fluorescent lights contain gasses made of mercury and argon, and halides primarily rely on mercury. These light systems have been in use over aquariums for decades, and barely anybody cares about the risks associated with their use. This is simply because the lights can only release the harmful substances when they break, and even then the risk most people care about is getting glass in their aquarium.