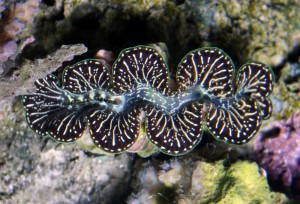 Image courtesy of Minh (aka OrionN) from ReefCentral

I wanted to start a new series of articles reflecting back on saltwater livestock that used to be “hot” in the aquarium hobby. These fish, corals, or invertebrates were all the rage at one point in recent history, but for whatever reason these animals are either no longer popular, have become so common they are no longer rare, or because of severe limitations they remain virtually unobtainable. Think of it as celebrating the blasts from the past.

The first formerly hot item I wanted to discuss is the black and white Tridacna maxima clam. These clams are still very popular and highly sought after, but they are very difficult to find. They do become available from time to time, but sell very quickly and often for multiple hundreds of dollars. At one point it was rumored that certain companies have been breeding B&W maximas, but it was unfounded and obviously the market isn’t currently flooded with them.

Because these clams are so hard to get, many hobbyists have given up hope of ever buying one for their aquarium, myself included. The B&W maxima is extremely gorgeous. I fancy the Zebra striped maximas personally, but I’ve also never seen a B&W maxima that wasn’t jaw-dropping.