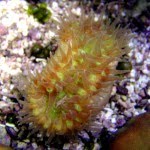 In late 2009 we introduced the strange and rare Heteropsammia cochlea, or “Walking Dendro”. Sea Dwelling Creatures originally imported this unique coral, only obtaining a small number of individuals, but it was enough to intrigue reef hobbyists world wide…at least for a short time. Only half a year has gone by since the arrival of these “Walking Dendros” stateside, and there has been almost zero chatter about these corals recently. You can still find the occasional specimen offered online, but the hype behind these corals has fallen off drastically.

Read about this coral’s background and see more pictures after the page break. 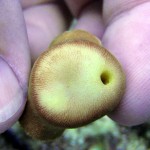 In case you don’t recall what the hype was all about, here’s a bit of background on the coral:

H. cochlea doesn’t attach itself to a rocky surface like most corals. Instead, it likes to dwell in the sand. But what really makes this coral different is that a sipunculid worm, also called a peanut worm, resides in the bottom of this coral. H. cochlea attaches to the worm while it is still in larval form. As it grows, it envelops the worm and nearly engulfs in entirely. The worm takes up residence in the base of the coral, carving out a small hole from which it can gather food and move around.This symbiont provides the coral with a form of locomotion in exchange for some living space and even dig it and the coral out if they become covered with sand. 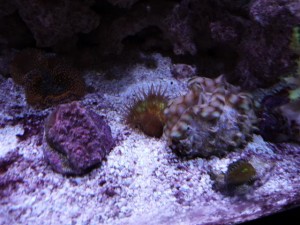 I’ve seen several of these last for quite a while in captivity, as they are pretty much just like any other LPS coral. They require target feedings and plenty of space to crawl around in.