Trending
You are at:Home»Aquarium Equipment»Maxi-Jet Pumps Now Being Sold with Additional Propeller and Shroud 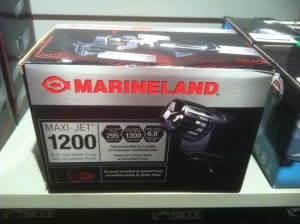 The Maxi-Jet pump has been around longer than many of us have been keeping aquariums. Their almost universal application, inexpensive price tag, and rock solid performance have lead these pumps being used as circulation pumps in the display aquarium, as feed pumps for media reactors, and as mixing pumps for saltwater containers. These examples are just a few of the many of course, and over the years the ever tinkering hobbyist has taken this powerful and reliable little pump and added a few DIY accessories to turn the further expand its usefulness.

The first upgrades we saw to the Maxi-Jet were simply from cutting off the narrow nozzle from which the water flowed, thus creating a much broader stream. Then hobbyists started turning the pumps on their sides, swapping out impellers for propellers, and adding shrouds to protect the new props and keep fish from becoming minced meat. These upgrades each improved water flow rates and the broadness of the flow, eventually allowing the Maxi-Jet 1200 to go from 295 gallons per hour out of a tiny opening to a whopping 1300+ gph from a much larger opening. Manufacturers started catching on, and the shrouds, propellers, magnet mounts, and other mounting hardware became commercially available, virtually launching many new companies in the process. Flash forward a few more years and Marineland, the company who actually makes the Maxi-Jet pumps, has finally started releasing the powerheads not only with all of the accessories needed to run the pump in the traditional manner, but also with the propeller, shroud, and magnet mounts that turn the pump into a flow creating workhorse. And the best news out of all this, it doesn’t look like the price on the Maxi-Jets has gone up even though all of the new accessories are being offered. A Maxi-Jet 1200 with all of the additional hardware only cost around $28.

A couple of more pictures can be seen below. 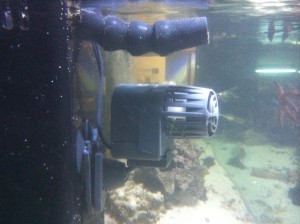 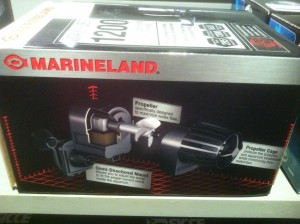