Trending
You are at:Home»Aquarium Equipment»Orphek’s Generation 2 Power LEDs Come Out This Month 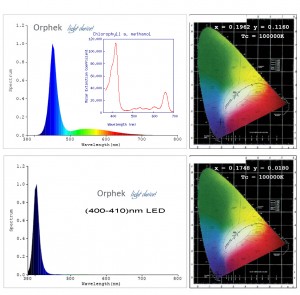 Orphek recently announced that their new Generation 2 Power LEDs will be available in their fixtures starting later this month. These new diodes, of which there are two, will come in 15000K and 410nm ultraviolet. Also according to Orphek, the 15K diode has the most PUR, or Photosynthetically Usable Radiation, of any white LED on the market. Not to be confused with PAR, or Photosynthetically Active Radiation, PUR is the portion of PAR that is actually absorbed by photopigments found in the coral’s tissues. They further back up their claim with the release of spectral plots of these two new diodes, which can been seen above. Along with those two plots is a graph showing the spectral absorption of Chlorophyll a, which is a pigment found in Zooxanthellae.

You might notice when browsing Orphek’s site or researching their products that previously released fixtures use 16000K and 450nm diodes. While those diodes did very well to mimic the light spectrum used by Chlorophyll a,  these new LEDs emit a spectrum that is a little bit closer to what is absorbed. So, with these new diodes, expect the usable radiation of Orphek LED fixtures to increase to some extent.