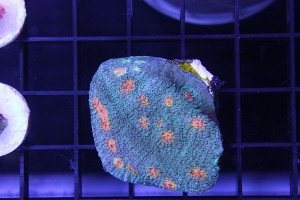 The Miami Hurricane Echinophyllia is a stunning coral to say the least. It’s neon orange eyes contrast sharply with the green and aqua-colored base, though the base may appear gray on some individuals.  This limited edition chalice was named for its resemblance to the colors of the University of Miami, and interestingly, it is the same as the Pumpkin Patch Echinophyllia. Both of the Miami Hurricane and Pumpkin Patch are offered by Reef Farmers, but for some reason they aren’t priced the same even though the high end coral retailer admits they are identical. Despite the price tag, this and many other high-end chalices are highly sought after. Most of it has to do with the coloration, but some buy these corals for the perceived exclusivity.