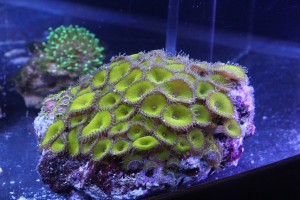 Pictured in this week’s AquaNerd POTW is a “Nuclear Green” Palythoa colony. These palys are extremely popular among reef hobbyists mostly because of their coloration, but I think what adds to their popularity is the fact that the “Purple Death” paly looks so similar. With the exception of coloration, both the Nuclear Green and Purple Death palys are almost identical. You can often find both of these corals in the same tank, with most hobbyists placing them immediately next to each other.

The Nuclear Green palys often fetch about $20-$40 for a small colony consisting of 5-10 polyps. A couple of years ago, these and the Purple Deaths actually got quite a bit more, up to $15 per polyp. Fortunately, hobbyists have been able to propagate them and bring the prices down significantly. Fragging these palys isn’t very easy to do though. New frags of the Nuclear Green palys may appear fine for a few days, but many will close up and remain that way until they melt away.