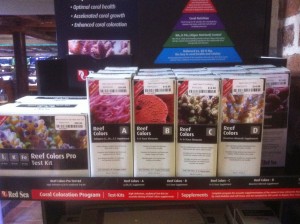 Over the past few weeks, Red Sea has released an entire new lineup of test kits and additives called the Red Sea Reef Care Program. The system is based on testing all of the essentials for your reef, then dosing those elements that your system lacks, as well as controlling excess nitrates and phosphates. The kit is quite extensive, and each portion of the system can be purchased separately as your tank requires. The program focuses on building a solid foundation of coral growth, reducing nutrients like nitrate and phosphate, and enhancing coral colors to give you a more stable reef aquarium.

The rest of the Red Sea Reef Care Program is described below.

From what I’ve been told, the Reef Energy additives are similar to the Korallen-Zucht products. They come bottled as Energy A, which is concentrated lipids and carbohydrates, and Energy B, which are amino acids and vitamins. Each of these save metabolic energy because they are pre-digested and will provide more energy for your corals to focus on growth and reproduction. 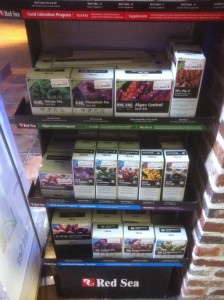 The Red Sea Algae-Control comes in two phases. The first of which is a series of test kits designed to measure concentrations of nitrate and phosphate down to 0.02 ppm concentrations. Each test kits comes with enough reagent to run 100 tests.

The second half of the Algae-Control program is nutrient control. Red Sea has a new product called NoPox (derived from NO3PO4-X) which acts much like biopellet media. The NoPox enhances bacteria to essentially eat any available nutrients in the tank.

Once all of the coral growth and color inhibiting nutrients are removed from the aquarium, the hobbyists can now focus on coral color. Four products fill the Color Pro program, with each having been designed to enhance certain pigments in the coral’s tissues. Red Sea Colors A consists of iodine, bromine, and flourine to enhance pink colors, Colors B contains potassium and trace elements to enhance red, Colors C has iron and more trace elements to bring out the greens, and Colors D has bioactive mineral supplements to enhance blues.

If you’re a FOWLR aquarium owner, Red Sea hasn’t forgotten about you. Coralline Gro is a live rock vitalizer that boosts the growth rates of the pink and purple calcareous algae, keeping your fish-only tank beautiful without too much fuss.