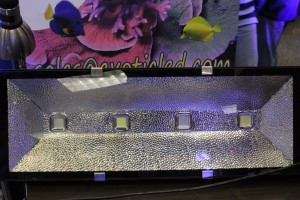 While at the NextWave event a few weeks ago, we had the opportunity to chat with the crew from Exotic LED about their new fixtures, and they had plenty of fixtures to discuss. Besides the typical PAR38 lamps and fixtures packed full of low wattage diodes, Exotic LED showed off one interesting fixture that drew a lot of questions at the event. Unfortunately the crowd noise made conversation a bit difficult, but we have managed to gather up at least some information. The 200 Watt LED Halide, as it is called, has four 50watt Bridgelux LED chips placed in a rather large reflector. The LEDs come in two colors, 10000K white and 460nm blue, with each color being on separate channels for independent control. The LEDs run cool, so no fans are needed, which also means you don’t hear the constant buzzing noise of the fixture.

As far as dimensions go, the LED Halide measures 36.6″LX11.2″W X 3.66″H and weighs a whopping 40lbs. The weight will present a major challenge to most aquarium keepers, especially when opening up canopies or simply mounting the beast to, well anything. Despite being only three feet long, this fixture can easily cover tanks 48″ long and deliver plenty of light to even 30″ tall aquariums. According to Exotic LED, their 200watt fixture had PAR measurements of 1400PPFD at the water’s surface, 800 at 12″ down, and 200 at 24″. To make a general comparison, the 8-bulb T5HO fixture that I’m using has a PAR reading of approximately 130-150PPFD at 16″.

The price for the LED Halide fixture is set at $1000, though they aren’t quite available to purchase from the company’s online store.

Just in case you are feeling a bit of deja vu, you might recognize these LED chips, as they look almost identical to those used in the Ecoxtic Photon Cannons. Despite the similarities, the chips between the two companies do differ in color at least. Both of the Ecoxotic chips are on the bluer side and reside in individual pendants.

As the reflector goes on the LED Halide, I can’t say I’m a huge fan. It harkens back to the days of halides and spider reflectors, and with all of the LED and reflector developments in recent years, I was actually both surprised and disappointed to see it. Perhaps the crew from Exotic LED will offer up an explanation, but until then that’s my opinion. Another thing that doesn’t sit well with me is the name of the fixture. Calling it the LED Halide can confuse hobbyists, but I have a feeling the name comes from the company’s claim that this particular LED fixture has been designed to replace metal halides. The name really isn’t a huge deal, as it has no affect on the light’s functionality, but I would have liked to see something a bit more creative.