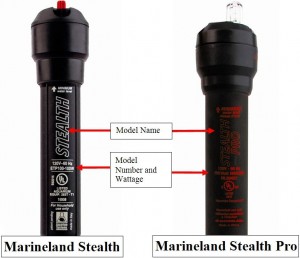 Weeks ago, Marineland began investigating overheating issues with their Stealth and Stealth Pro lines of aquarium heaters. They told retailers to stop selling these particular heaters and suggested that consumers stop using them while an investigation of the products was performed. Fast forward a couple months and consumers have been officially notified of a voluntary product recall by United Pet Group, who happens to be the parent company of Marineland. According to the recall announcement, approximately 1.2 million Marineland Stealth and Stealth pro heaters are being called back due to wiring issues that cause the heaters to overheat or even break during normal use. The hazard associated with the faulty wiring is not only the potential of your aquarium to overheat and kill your livestock, but the heaters also pose a fire and laceration hazard. Putting real numbers to the hazards, United Pet Group reportedly received 38 reports of fires and 45 reports of broken aquarium glass, and even an eye injury.

If you have one of the affected heaters, please take it out immediately. To view the heaters involved in the recall, please visit U.S. Consumer Product Safety Commission.