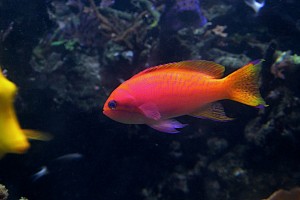 Pictured in this week’s AquaNerd Picture of the Week is a gorgeous female Bimaculatus Anthias (Pseudanthias bimaculatus) from the London Sea Life Aquarium. The female of this species has a pink head that fades into yellow on the tail, along with yellow dorsal and anal fins. The male on the other hand, has a pink head that fades into red toward the rear half of its body. This individual is obviously vibrantly colored, so much so that I initially thought it was a male Bimaculatus anthias. Given the fact that the aquarium housing this particular fish only had female Bimac anthias, one might assume this fish was in the process of changing from a female to a male. After all, it was the most vibrantly colored of all the Bimacs in the tank.

Anthias, like clownfish, are hermaphroditic. This means they can change from one sex to another depending on environmental and population cues. Unlike clownfish however, anthias change from female to male, with a single male usually living among a harem of females. If the male is absent, or dies, the most dominant female will changed into a male.