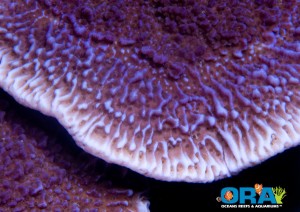 ORA has unleashed an exciting new coral onto the reefkeeping hobby. Their new ORA Purple Undata, a Montipora species of course, is all purple…base, polyps, everything. And apparently ORA has been sitting on this coral for a few years, since they first acquired it way back in 2008 from a European hobbyist. It’s neither here or there, but why does it seem all of the European hobbyists get all the good stuff?

As with all frags from the world famous aquaculturists, the new ORA Purple Undata will be approximately an inch long/wide and will come attached to either a cement and aragonite frag disk.

The ORA Purple Undata is a brightly colored encrusting / plating Montipora. The polyps of this coral are small, purple in color and lightly scattered between the coenosteum ridges. The Purple Undata grows into a thick, dark purple plate with a light purple edge. This is a fast growing coral that thrives under a wide range of lighting conditions. Under intense lighting, this coral’s coloration can take on a blue hue that really stands out. We have been working with this coral since 2008, our original piece came from a European hobbyist.

Frags will be approximately 1 inch and will come attached to a cement/aragonite disk.