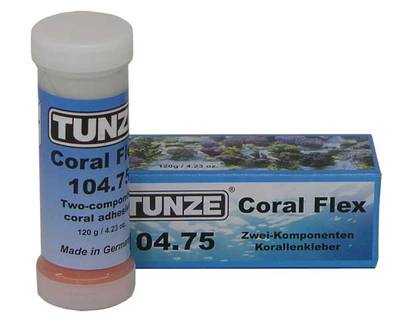 Tunze is rolling out a new product, but not a water pump or protein skimmer. Instead, they’re releasing the new Tunze Coral Flex, which is a two-part epoxy designed to fix corals to live rock or help bind a couple of pieces of live rock together to help with aquascaping. According to Roger at Tunze USA, their new coral adhesive sets in less than 2 minutes, remains flexible, and is completely non-toxic. The flexibility of this epoxy after it cures is just one way in which it stands apart from other “aquarium-safe” epoxies offered to hobbyists. The traditional two-part putty epoxies get very hard, even brittle after they spend a little time in the aquarium environment. When attaching live rock together, there’s a good possibility that the epoxy bond between two pieces of rock will break as the structure settles in or shifts. This could of course lead to more rocks shifting or falling, but the Tunze Coral Flex prevents this by remaining flexible.

The other aspect of the Coral Flex that puts it head and shoulders above the rest is its non-toxic nature. Sure, other epoxies claim to be “reef-safe”, but in reality they do release some toxins into the aquarium. Granted, these are in tiny amounts and you may never see the side effects, but they are there nonetheless. The Tunze epoxy, on the other hand, is actually medical grade. This product was originally used by dentists to make impressions of teeth.

More details and images after the page break. 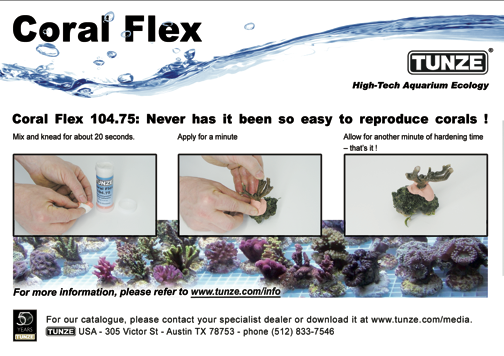 The use of this particular epoxy as a coral adhesive is actually patented by Amphiprion Aquaristik and Preiss Aquaristik of Germany. Every company that sells this product as a coral adhesive must pay a them a royalty, including Tunze. This is unfortunate, but it goes to show you just how dedicated Tunze is to delivering a great product, even if they have to pay a little more for it. A 4oz package of Tunze Coral Flex will run $20.44.