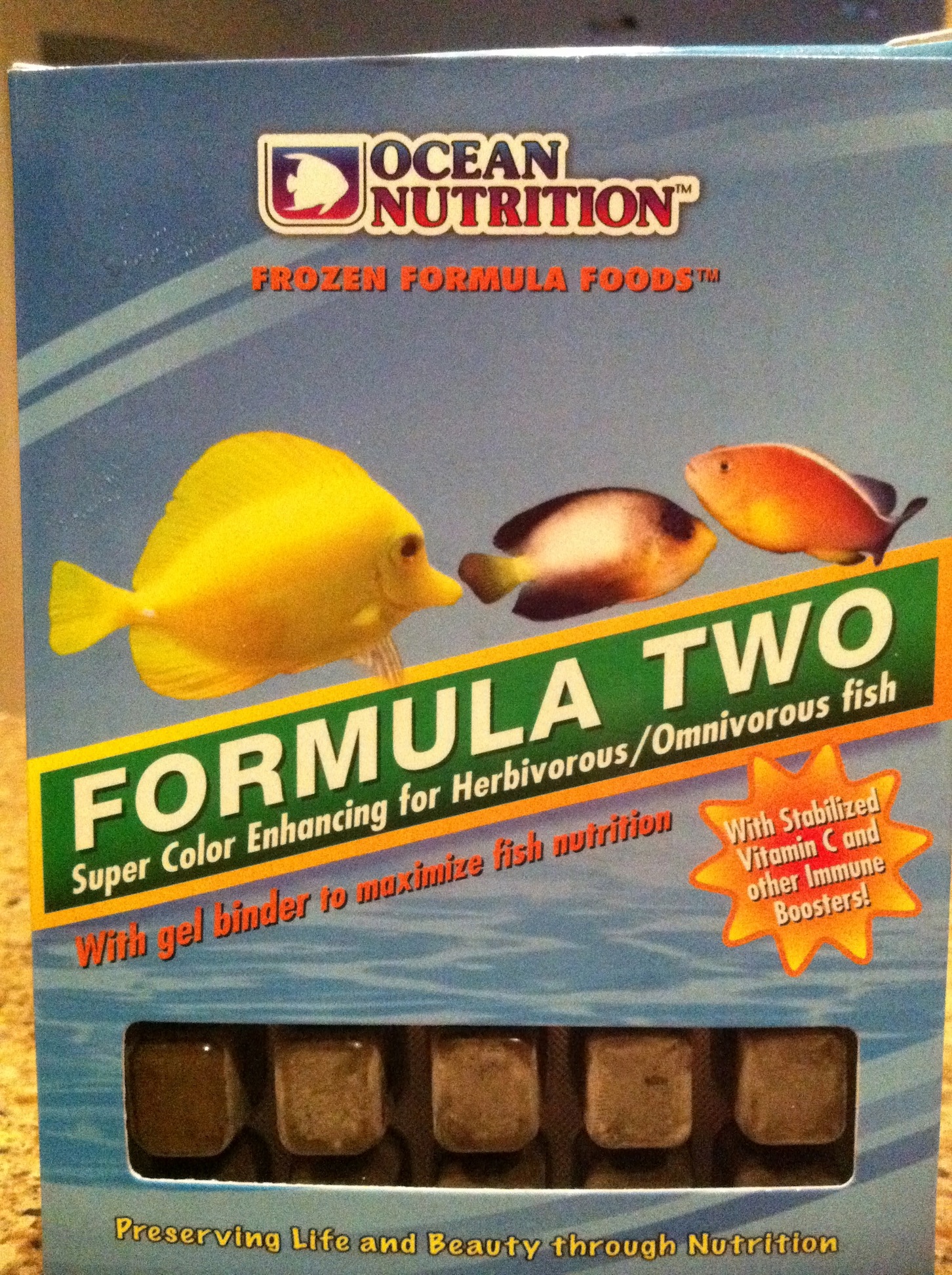 We recently acquired a small package of Ocean Nutrition Formula Two for herbivore and omnivore fish from a local fish store who asked us to give it a go. So, we decided to put it to the ultimate test, try and feed a newly introduced and very finicky fish. The test fish was a brand new addition to our frag tank, a Yellow Eyed Kole Tang. This particular individual was very shy, immediately retreating behind the rocks when anyone approached the tank, even after it had been at the store for a couple of days. The fish was acclimated to the frag tank for approximately 2 hours via the drip method, and introduced to the tank with the lights out. The following day, the lights came on at their normally scheduled time and the tang ventured out to explore its new environment. I placed a sheet of green algae into the tank, rubber banded to a small piece of rock, but the tang refused to even go near it. I even tried to use Spirulina enriched foods, but again, the tang refused. Then it was time to try the gel based herbivore food, so I pulled it out of the freezer and soaked it in a cup of aquarium water.

After soaking the food for roughly 15 minutes, the Formula Two gel never dissolved like other frozen foods. Instead, it stayed in the same exact shape as the blister package it came out of.  So, I took a turkey baster and smashed the food up into manageable chunks and proceeded to feed the tang. The gel dropped to the bottom of the tank and the Kole tang attacked it almost instantly. The fish grabbed a rather large chunk of the gel food, but persisted in tearing it into small chunks and eating all of it.

Seeing as how the fish just came from the store and was most likely malnourished, I put in another small clump and the tang reacted with the same veracity. I have since repeated this feeding chore every single day, and almost as if the tang was starving, it attacks the food and eats up every bit. Thinking the fish had regained its post-shipping appetite, I tried to feed the nori sheet and the spirulina enriched foods that I had previously tried. The Kole tang basically turned its nose up. It wouldn’t even look at these other foods. But every time I put the Ocean Nutrition Formula Two into the tank, it eats every piece of it.