Trending
You are at:Home»Aquarium Livestock»Hot Little Ember Blenny at LiveAquaria 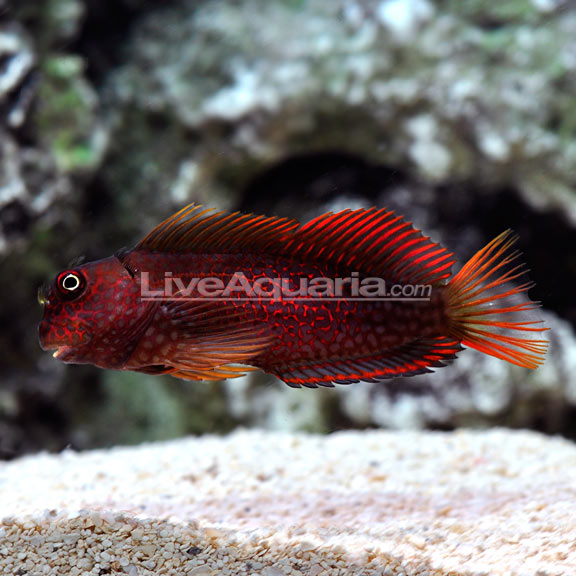 Early yesterday, we noticed a very attractive blenny posted on LiveAquaria’s Facebook Page. The fish was an Ember Blenny (Cirripectes stigmaticus) and it was headed straight to the Diver’s Den. Also known as a Stigmata Blenny, this stunning fish was a “super male” that sported blood red coloration with a beautiful honeycomb pattern. The blenny was a little over 3″ in length and was being offered for a mere $80. Of course, the fish sold almost instantly, hence the use of past tense expression in this article. And because these fish aren’t very common, don’t expect to see too many more in the near future.

For those interested in learning a little more about this species, keep reading below.

The Ember Blenny is obviously one of the more colorful blennies available to hobbyists, and the most colorful come in the form of super males. This species comes from Vanuatu, a chain of islands east of Australia, and stays relatively small with a max length of 4 to 5″. Like most reef fish, the C. stigmaticus blenny changes sexes to suit local population needs, and the most dominant male turns into the vibrantly colored super male like the individual seen above. Females and sub-dominant males are much more drably colored, sporting grey colors over a similar honeycomb pattern, though they can both turn into super males without much notice.

Like most blennies, this species will eat virtually everything in the aquarium and will have tons of personality. The fish will hop from rock to rock, moving its eyes rapidly and randomly while it searches for its next meal and watches out for potential trouble. Smaller aquariums will be suitable for this fish, and they usually play nice with other fish in the tank.