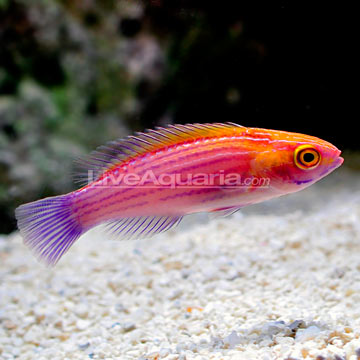 Listen up wrasse connoisseurs, the Diver’s Den section of LiveAquaria just posted an Earl’s Fairy Wrasse up for sale last night. For those not familiar with this species, it is considered by many (myself included) to be one of the rarest and most beautiful wrasses in the world. Known only to the waters of Palau, these fish are found at a depth surpassing the 200 foot mark and only a handful of individuals have even been seen in the aquarium hobby. Fewer yet have made it to the US, so seeing this rare gem show up in the Diver’s Den is a real treat. And it just so happens that LiveAquaria has two of these fish, but the other one hasn’t been listed for sale because it was apparently camera shy. The individual pictured above is approximately 3″ long and is listed at $1500.